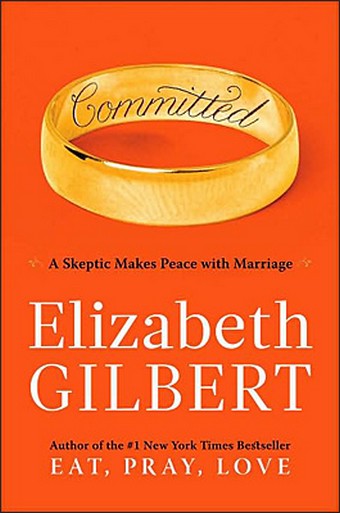 It took me longer than usual to read Committed.  My aunt had sent me the book for my birthday (in April) and I was excited because, and yes I will admit it, I loved Eat, Pray, Love (and I’m excited for the movie). I was a bit saddened to find out that Gilbert had once again gotten married but once I delved deeper into her second memoir, I realized that her (and her now-husband, Felipe) were as equally saddened by the fact that they had to once again be married.  For some reason, that made me feel better.

Committed was more-or-less a study of marriage in western culture intertwined with her dealing with her personal struggles regarding marriage and all that happened while her and Felipe were traveling around Asia when they he wasn’t allowed back into the country.  They even asked the US Department of Immigration if Gilbert could hire him, to which the immigration official asked Felipe, “You would rather be employed by her than marry her?”

There were so many interesting facts in this book that I could go on for days.  None of it made me want to run to the alter, obviously.  Gilbert made peace with the fact that they just had to get married and then the US Government didn’t matter one bit.  They could shape their marriage however they wanted.  THe US Government could, for lack of better phrasing, go to hell.

I’m excited to read her next book, which I’m hoping she’s already writing.  I think this is a must-read for anyone who is getting married or aspires to.