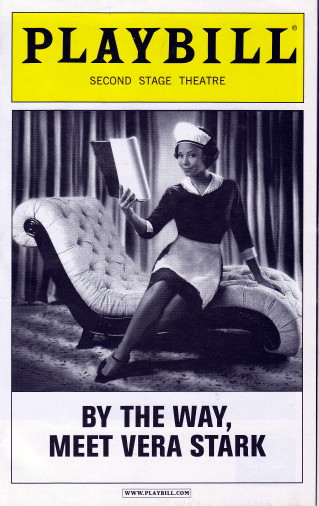 By the Way, Meet Vera Stark, by award winning playwright Lynn Nottage, is the newest work at Second Stage right now and it’s a fascinatingly interesting and thought-provoking piece.  By the way, I have no idea where they conjured the name from because the “By the Way,” in my humble opinion, is totally unnecessary.  I digress.

Vera Stark is about a black woman, Vera, who’s an aspiring actress as well as servant to a prominent white movie star Gloria Mitchell (Stephanie J. Block).  Vera asserts herself with her friend Lottie (Kimberly Herbert Gregory) over how she would never lower herself to play the role of a slave in a movie, but given the first opportunity to do so, she ceases the moment.  Act Two takes place many years later on a talk show after Vera’s career has sky rocketed and she is now retiring from the industry.  There are hints that Vera and Gloria were actually sisters, but it’s never revealed what is true and what isn’t.

The play is an insightful look at race during that decade and race relations many years later and whether or not Vera compromising her dignity was worth it in retrospect.