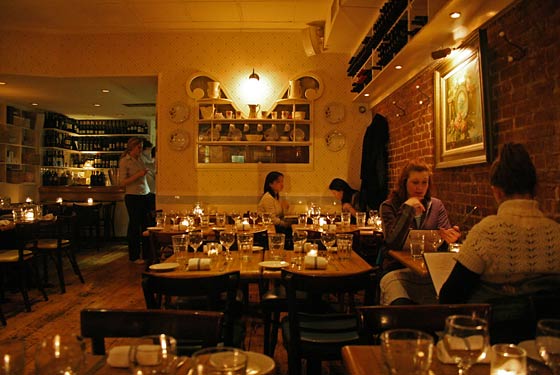 So on Friday night, we (Amy, Mallory, and myself) had one of our dinners that we have every so often but this time we decided to take our dining out onto dry land and not cook for ourselves.  In an effort still to be cheap save money, Amy and I immediately thought of Bianca.  Bianca is a charming little hole in the wall in the East Village that you’ve probably walked by a thousand times.  The inside (see above) is cozy and dimly lit.  It’s located on Bleecker and Bowery, doesn’t take reservations, or credit cards.  It’s totally worth the wait, the trip downtown, to the ATM though.  The food is to die for.  Homemade pasta, raviolis, etc.

The five of us split an appetizer, a bottle of wine (red), each had entrees, and desserts, and our total bill was $115 (I think).  So it’s pretty cheap considering the quality of the food (the portions are smaller than your average portions in America, but we’ll consider that a positive attribute!).