By now you might have guessed that I love a good Macbeth. Whether it be one man and ninety minutes, or three and a half hours with a full ensemble, I just can’ get enough of this drama. Yesterday I went to see Lincoln Center’s revival at the Vivian Beaumont Theatre. Ethan Hawke was staring in the title role and though I can’t think of a single movie I’ve ever seen him in, I was excited to see what he could do onstage.

The production value was fantastic. The lighting and sound designs, Japhy Weideman and Mark Bennett respectively, made the show fifteen times better than any production I’ve seen before. The three witches were played by men in drag (Malcolm Gets, John Glover, and Byron Jennings), which was amazing. Brian d’Arcy James owned his scenes as Banquo, and Anne-Marie Duff was marvelous as Lady Macbeth. The only weak link in the cast? In my opinion it was Ethan Hawke. He was monotone and had only one expression (he’s kind of the Kristen Stewart of Broadway). Maybe my prejudice comes from having seen two masters, Patrick Stewart and Alan Cumming, play the role before him, but I was far from impressed.

Regardless though I still enjoyed this production immensely. I’d probably even see it again. That’s just how much I love Macbeth. 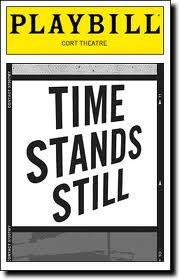 I saw the re-mounting of Donald Margulies’ Times Stands Still this past Wednesday, thanks to my friend Patrick.  I was quite nervous because it’s been a while since I’ve watched a show that takes more than an hour and a half and one act, and after a long day at work, I wasn’t sure I could handle two acts.  Did I mention that the original production that, produced by Manhattan Theatre Club, that I saw in March wasn’t exactly my favorite?  I really wanted to see Christina Ricci onstage though and I crossed my fingers that some overhauling had been done on the script.

Time Stands Still tells the story of a couple, a war photographer (Laura Linney) and a war reporter (Brian Darcy James), who arrive home after the photographer had been badly injured.  They struggle between wanting to be in the middle of the action and wanting a safer and more conventional life.  Eric Bogosian plays Linney’s editor, with Christina Ricci as his newer (and much younger) girlfriend.

James, Bogosian, and Linney are all terrific actors and once again did not disappoint.  It took me the entirety of the first act to warm up to Ricci but once the second act rolled around, her character had matured a bit, and she definitely had the affection of the audience who laughed at every joke she delivered.

The first act flew by and had definitely been tightened up, unfortunately though the second act still needs tweaking.  It slowed during the middle of the first scene and failed to pick up speed again during the second scene.

Overall I definitely enjoyed it more than the first time.  If you saw it at MTC and you’re skeptical of this new production, you needn’t worry because this may be a show that requires more than one viewing.

I was very sweetly given a ticket to Manhattan Theatre Club’s production of Time Stands Still yesterday evening.  I was very excited because of the cast (Eric Bogosian, Laura Linney, Alicia Silverstone, and Brian Darcy James) but I knew little-to-nothing about the plot.  I read a quick summary on Playbill and was semi-intrigued.  Did I mention I ended up sitting next to Barbara Walters?  That was kinda cool, though I didn’t say anything to her.

It tells the story of a couple, a war photographer and journalist (Laura Linney and Brian Darcy James, respectively), and their friends (Eric Bogosian and Alicia Silverstone).  Linney’s character was injured in the Middle East and is just returning home.  As the play unfolds, the characters realize that time doesn’t stand still and that the things they want are changing.  The cast all gave compelling performances, and even Ms. Silverstone didn’t disappoint!  (Though her character was only slightly deeper than her character in Clueless.)

Time Stands Still was also two acts, about an hour and fifty five minutes, and never once was I bored and checking my playbill.  As you can see, I waited around after the show and yes, I brought my copy of Clueless for Ms. Silverstone to sign.  How many chances was I going to have to ask her?  Thanks to her I spent much of fourth grade in knee socks and plaid skirts (a habit I thankfully grew out of).  And Eric Bogosian was thrilled to sign my copy of Suburbia, which is my favorite play of his, telling me, “a girl after my own heart!”

What’s on my agenda for next week?  Ages of the Moon on Sunday and The Miracle Worker on Wednesday!