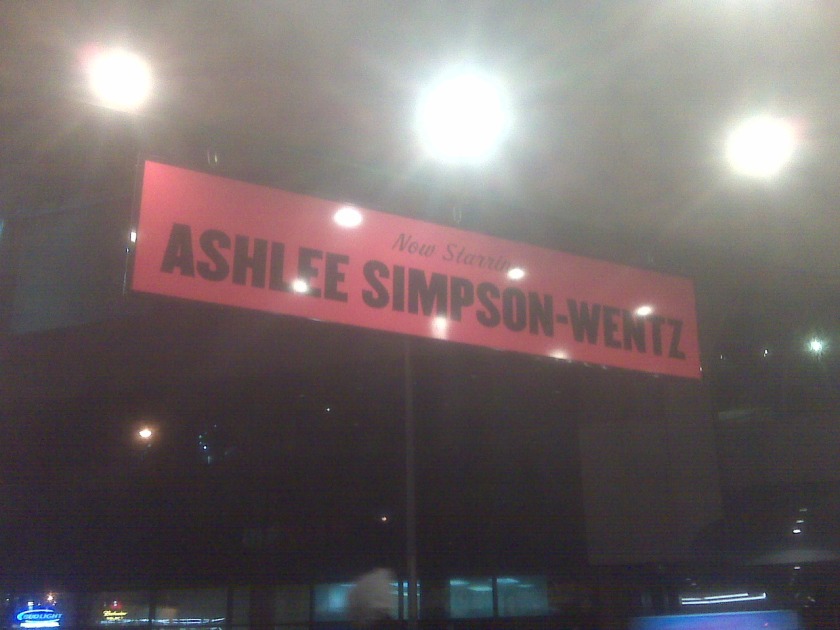 So, I saw Chicago for the first time since 2005 (I worked there twice that year).   I believe this was the first time I truly enjoyed seeing it, at least since I saw the original cast in 1998.  Above, Ashlee Simpson-Wentz, was my main motivation for seeing it again.  I know, I know, she can’t sing, blah blah blah.  But Roxie is not a hard role to sing, it’s more physical than anything else.  I went in with a semi-opened (and hopeful) mind.

My friend and I cringed at a few of the first notes she had to sustain for more than 2 counts in Funny Honey.  They fell just a bit flat.  I thought she was especially good in the song Roxie, though some of her notes fell flat again in Nowadays at the end of the second act.  We cringed.  A bit.

Other than those two songs, she was fine.  Her acting was cheesy, though it was appropriate to the character; and her dancing was fantastic, as I thought it would be.  She made the choreography look fantastic and effortless.

All-in-all, she lived up just fine to my expectations.  She may even have surpassed them vocally in some cases.  So, if you haven’t seen Chicago before, Simpson-Wentz won’t ruin the show for you and if you have, you will probably still enjoy it.

I saw a reading of this show back in spring 2006.  Though I liked it (probably largely because of Chad Kimball’s performance and presence) and was excited when I heard it was finally coming to Broadway, I was disappointed when I heard only negative things from the theatre community.  Reviews were mixed at best, and I waited quite a while to see it (though I’m not sure why).  When Amanda said it was up on TDF and we were both free to go, we booked the tickets and went.

Memphis is playing at the beautiful and historic Shubert Theatre on 44th Street – a theatre that I hold close to my heart from my days of working at Spamalot.  Our seats were fabulous – third row of the mezzanine.

Memphis tells the story of a young white boy, Huey (Chad Kimball) in Memphis who travels to the “dark” side of town to visit the clubs and listen to the music that’s played.  He wants to be a DJ and eventually takes over a radio station and becomes a hit – the music too.  He falls in love with Felicia (Montego Glover), the sister of the club owner, and this provokes a bit of an outrage.

I really enjoyed the show except for a few things.  There was way too much going on in the opening and closing numbers to really concentrate on anything at all.  I didn’t know where to look during the opening number, or what was going on.  The act 1 finale is basically the act 1 finale of Ragtime but a couple of decades later – which I found a little annoying and quite humorous.  I probably enjoyed the rather impressive choreography the most – other than the cast, which was comprised of very talented singers and dancers.

I would definitely recommend this show if you’re looking for upbeat music, a show that won’t bore you to tears, and something that isn’t a revival or a movie-to-musical.

So last night, Ian, Amy, Chris and I saw 9 to 5 (the musical) and we all wanted to meet Allison Janney after.  I didn’t check my camera to make sure that it was on the ‘camera’ setting first, whoops!