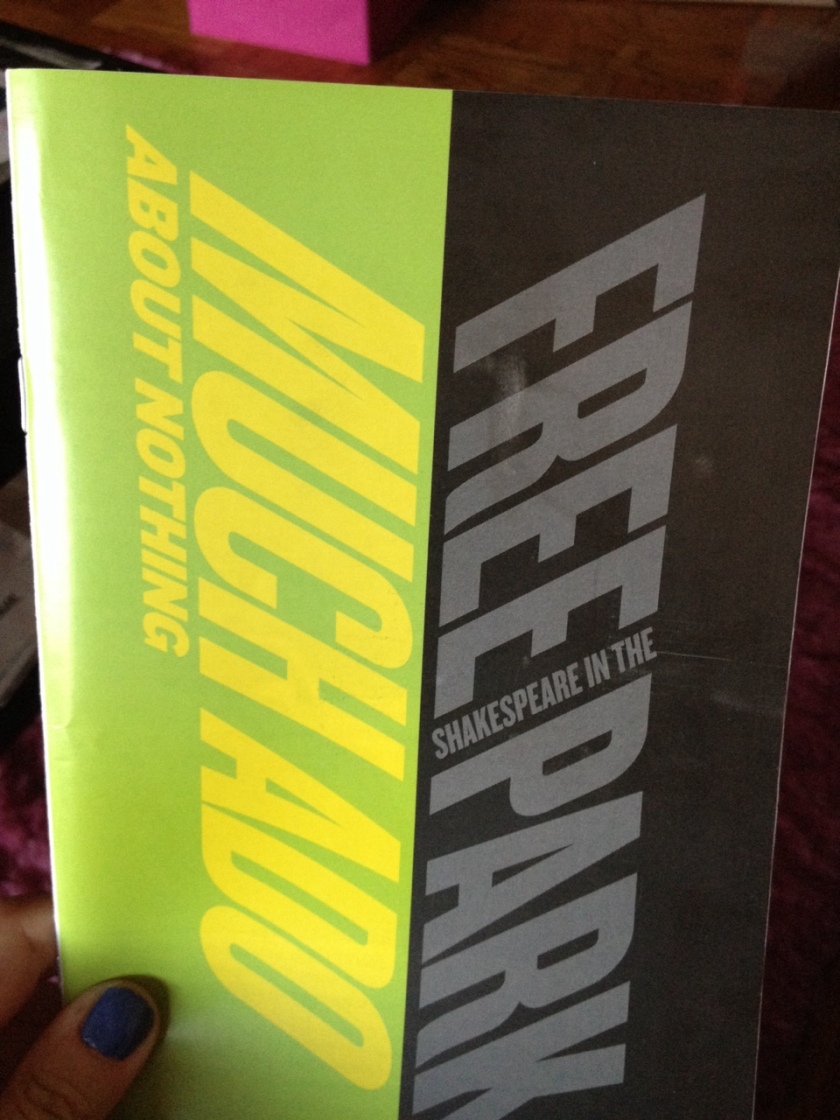 You know you’ve made it in New York when you can go see Shakespeare in the Park without having to wait in line. Something like that. My friend texted me two Wednesdays ago saying she had two tickets to Much Ado About Nothing and I canceled my plans to go to yoga and immediately headed to the park after work.

I’d really wanted to see this because of Hamish Linklater and Lily Rabe. Because, duh, they’re fabulous. I hadn’t seen Much Ado since I was in 5th grade and saw my high school’s production, but got the gist from reading a brief synopsis before the show that night – love triangles, tricks, and all of that. Great, so basically your typical Shakespearian comedy. To be honest, I’m a much bigger fan of Shakespeare’s dramas and tragedies than I am of his comedies. But this is Shakespeare in the Park. And it’s free. And it’s a New York tradition. It’s my tradition. There was no way I wasn’t seeing it.

Linklater and Rabe made the show for me. They were both absolutely brilliant. Brian Stokes Mitchell was miscast as Don Pedro and I barely noticed when he was onstage (and that’s saying something). There were really no weak links in this, but Linklater and Rabe just made this so-so comedy of Shakespeare’s that much better to watch.

Much Ado About Nothing plays through July 6th, so this is your last week. Get thee to the Delacorte!

I saw Love’s Labour’s Lost at the Delacorte two Sundays ago after I found out my friend Steve was able to get an extra ticket for me. I missed out on Comedy of Errors, sadly, but I was stoked to see this one especially because Alex Timbers and Michael Friedman were behind the score. Oh, and did I mention that it was an hour-forty with no intermission? Lastly: the cast seemed pretty kick-ass.

All of this was an equation for an awesome show.

Well, it had it’s moments. I would prefer to listen to Bloody Bloody Andrew Jackson any day (as I don’t remember any of Love’s score). The set was beautiful, the band was great (I love that the conductor was occasionally part of the cast), and the cast was pretty kick-ass.

I really enjoyed the performances that Patti Murin, Daniel Breaker, and Kevin Del Aguila gave. I thought it was really awesome to see Rory Thayer (the red head from the movie Accepted) onstage too.

So I’ve seen better at the Delacorte, but I’ve also certainly seen worse.