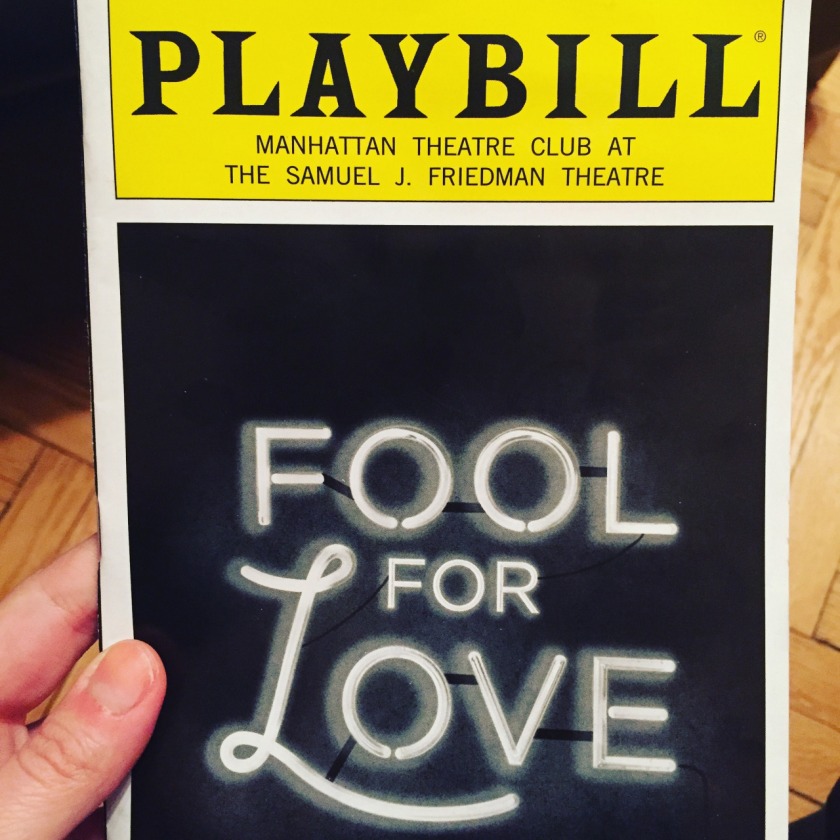 Last Saturday I saw Sam Shepard’s Fool For Love at MTC’s Samuel Friedman Theatre. Frankly, I went because Nina Arianda is amazing, and so is Sam Rockwell. I was obsessed with Shepard’s Buried Child in college, but it was pretty absurd and took a lot of studying to process even a little bit, so I knew this play would probably little to no sense at a first glance. And it didn’t. And that’s OK. It’s basically about a couple who have been on and off and about 15 years going at it again and we get to watch it go down for 75 minutes.

Arianda is amazing in anything and everything she does, but I don’t think I’ll ever be as amazed with her performance as I was in Born Yesterday or Venus in Fur (this is also OK). Her timing and nuance is impeccable. Sam Rockwell is great. As always. He’s so funny. He is ridiculous in a cowboy hat and holding a lasso, but he got the job done regardless.

I wouldn’t go see Fool For Love again, but I’m glad I saw it once.

So, it’s been a long week. At the end of the day on Monday, my boss called me into his office and told me that my position was being downsized. I’d been hired to be a finance and operations liaison to support a merger of two marketing companies on opposite coasts. When the west coast company went out of business (semi-unexpectedly?) two weeks ago, I knew my place at the company was up in the air. Honestly, it wasn’t the best fit for me, culture-wise, but I learned a lot (like how to work with someone who’s really difficult) and I had two really good interviews last week, I applied for a lot of jobs, and I met with a dozen or so recruiters and I’m continuing to do so this week. Luckily my dude is really fantastic at prepping for interviews, so he’s helping me a lot on that front.

It’ll all be okay.

I saw a friend at an event on Tuesday  night and she didn’t hesitate one bit when she heard I’d be downsized and she invited me to a networking event that was at the ungodly hour of 7am on Thursday. It was a good experience and I made a bunch of connections.

After a day of being productive, I went on Friday night I went to YogaWorks for a Teacher Training Class & Info Session with a woman who taught the very first class I ever took at YogaWorks. It was really interesting and although I’m not in a position to spend $3400 on it right now, it’s definitely something to consider in the future. I’m not sure I ever want to teach yoga. I’m simply interested in deepening my practice.

Needless to say, I spent the rest of the evening glued to my computer reading updates about the massacres in Paris. So, so sad. Religion is the worst. All religions. They all need to be put to rest.

I finally made it to my early morning yoga class on Saturday for the first time in what felt like forever and got my ass kicked. Most of Saturday was spent doing a lot of nothing, but I rallied and wandered downtown to visit Washington Square Park where I’d heard there had been rallies earlier in the day. The mayor’s office was planning to light the arch in the park blue, white, and red, which I thought was awesome. The Empire State Building stayed dark on Saturday night in solidarity with the Eiffel Tower.

Afterwards I saw Fool For Love (review to come!) before meeting up with Justin and one of his good friends for drinks at a favorite spot of ours, Anejo, in Hell’s Kitchen. Sunday was spent relaxing, watching Real Time with Bill Maher, and later on a trip downtown again to get my glasses fitted at Warby Parker and a late lunch at The Copper Still while my eyes glazed over during the Giants+Patriots game. (I seriously do not get football, but I was more than happy to support Justin and eat some delicious noms.)

It’s been an unexpected week, but not an entirely shitty one. Here’s hoping things progress to be even better this week.