Remember how I’d been going to the gym and using the elliptical 4 mornings during the week? Well, according to the above article that may have fucked up my metabolism and have a part in screwing up my weight.

BUT… but… I ran 5k twice last week and I almost enjoyed it and I’d like to keep doing it at least once a week. I ran for 31-33 minutes at a time so I’m thinking that might not be overdoing it too much.

This above article really drove home the need to do more weight training. I went to an Ashtanga/Iyengar-heavy yoga class last night and aside from my Saturday morning class, I’m going to do my best to stay away from Vinyasa/Power/Fire/Body Assault yoga classes.

And then, this morning, I used my arm weights and did a couple free weight exercises and then put on my Barre DVD and worked on the arm module and about half of the core module. I’m going to use the shit out of that DVD.

This morning I also noticed that eating cold foods in the morning don’t sit well in my stomach. Back to oatmeal for me! #protein

5 Reasons Running May Not Help You Lose Weight

I was going to start a completely separate blog to write about this stuff, but I decided against it because I don’t want to have 7 million blogs on the internet. So, click the “read more” link to hold me accountable and see how I did.

I’ve been doing pretty good with eating. I’m really trying to limit my snack and eat as many vegetables as possible. I realized that eating chopped veggies and guac instead of tortilla chips leaves me feeling a lot better. Duh.

How were your workouts last week?

I’ve been thinking lately that there’s a possibility that I’ve been working out too much. Or working out the wrong way. When I lost a whole bunch of weight from 2011-2012, I was mainly doing yoga and running (a mile here, a mile there).

Now I’ve added the elliptical and weights. Then I did shit ton of sit ups for a while. My torso looked great.

With primarily yoga (half vinyasa, half ashtanga/iyengar), very minimal hand weights, and the elliptical, I’m not sure I’m such a fan of how I’m looking, or rather, how I’m feeling.

I decided to run on the treadmill on Friday night instead of doing the elliptical because I wanted to run and it was too hot to run outside. I ran for about 24 minutes; a little over 2 miles. I felt great afterward. Running on the treadmill is the worst but I watched a very old episode of SVU, so I was kept entertained. On Saturday morning I went to my hardest vinyasa class and lost half my body weight in sweat. It was awesome.

Which brings me now to the topic of yoga: I used to do primarily vinyasa classes, which I only do once a week now. I could do them more but they seem so boring (save for my Saturday morning class with one of my favorite teachers). I’m rediscovering my love for ashtanga and iyengar, and not just going for updog as fast as possible, and as many times as possible.

And lastly, I’ve read about working out too much and how important rest days are. As far as I’ve been concerned, at least in the past, rest days are for the weak. But maybe now I’m coming to terms with the cold hard fact that they aren’t. I need a rest day, or two. I’m thinking this could be my potential schedule:

I’ll try it out this week and see how it works.

I’m doing a free two-week pass at Yoga Shanti (the studio across the street from my office) and I went to a class that was listed as “Open” last week. I was expecting it to be Iyengar/Ashtanga with different levels of difficulty for each pose. But then I got to the class and the teacher exclaimed, “it’s restorative day!”

And so I altered my expectations from getting a mild workout to getting no work out at all, but relaxing. I was disappointed at first, but then I reframed and thought, “you know, I had a colposcopy yesterday so maybe this is for the best!” and got excited.

Then… it turned out to not be so restorative. Or at least not the kind of restorative class I was expecting when I hear something described as “restorative.” There were lots of inversions, which I know are restorative, but for me, they’re not really relaxing. We did the kinds where my neck is hanging in midair and makes me really stress out.

Not exactly the kind of restorative that I was hoping for.

But then that’s what happens when you walk into a situation with expectations.

My options for yoga classes tonight were a very, extremely hard vinyasa flow class (with one of the best teachers ever though) and an advanced beginners iyengar class. Or an advanced pilates class.

I took pilates as class during the spring semester of my freshmen year of college. I was out of shape and it was hard. I continued doing it through the summer and then just kind of stopped. After doing yoga for three or four years, part of me thought pilates might be easy. But part of me also thought I might not be able to hack it.

I didn’t even break a sweat. I’m pretty sure I burned more calories on the 5 block walk to the subway afterward. I’m glad I tried pilates again, but I’ll stick with my killer vinyasa classes from now on. 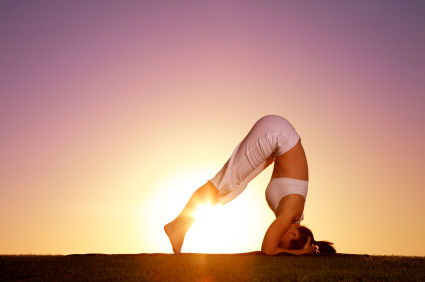 I love yoga. I hate inverting.

I take an advanced level iyengar class once a week and I like it, except for when we do things like handstands and forearm stands. The only inversion I can do confidently and easily is an L-shaped handstand. Otherwise I’m pretty sure I’m going to come crashing down 4 inches to the ground and break my neck.

I’d really LIKE to master seemingly simple inversions like headstand and forearm stand but I don’t know how to get past the fear of… Well, dying. That above is the furthest I can get in my forearm stand.

What’s the likelihood of me breaking my neck from a fall that’s four inches to the ground? I have no idea, really. Anyone? Bueller?

I feel like I have no bicep and tricep strength. But the thing is… I do, really. I’ve gotten up into handstand numerous times with assistance and spotting. If there’s someone there to catch me if I start to crash downwards, I’m fine. (of course, once I get up, there’s the question of getting down – which I always seem to flip a shit over when given the chance too.)

Right now I’m working on kicking up into handstand on my own. I’ve yet to ever get into a forearm stand on my own.  How has anyone ever gotten over their fear of neck-breaking? Let me know!