I couldn’t think of a more appropriate play to take in before the Thanksgiving holiday than The Cherry Orchard by Anton Chekhov. I knew it was be pretty dry, but the cast sounded too great to pass up. I showed up to the American Airlines Theatre last Wednesday around 2pm and took my seat in the last row of the orchestra.

I read the description in the Playbill, and the breakdown of the family members, so I had some idea of what I was getting into (tl;dr: A Russian family is going broke and losing the estate that they’ve lived on for generations). Sadly, Joel Grey was out that day, but I was still really excited to see Diane Keaton, as well as Tavi Gevison and Celia Keenan-Bolger. Oh, and Chuck Cooper, too.

The script was as dry and depressing as expected. The sets and lighting were lovely and mesmerizing. The performances were stellar. I can’t decide whether Keaton was great or overacting, because her character is a little delusional and crazy (think: a Russian Blanche duBois) so it was hard to tell. I still enjoyed watching her regardless. Keenan-Bolger and Gevinson were more compelling, though that might be because their characters were just more interesting to me. Then there was Chuck Cooper. who played a Russian businessman who knows the family. I love him in any and everything and he can do no wrong. Philip Kerr, who was on for Joel Grey, was whimsical with great comedic timing. Honestly, I can’t figure out why Grey would take a small, supporting role, but as great as he may be, I enjoyed Kerr a lot.

Roundabout has put on a stunning production with a stellar cast of a slightly boring Chekhov play. But hey, I knew what I was getting myself into when I took my seat. If you love this kind of play, this is a great production to see. 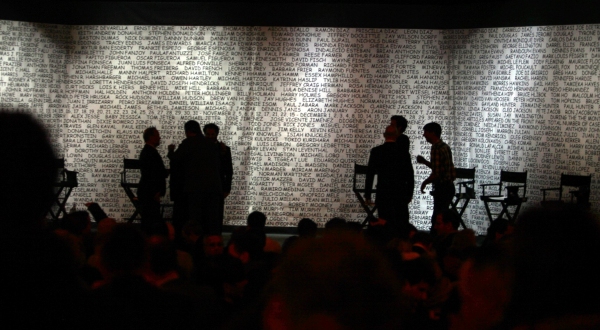 Words can’t describe how lucky I was to be in the Walter Kerr Theatre last night witnessing a bunch of rock star artists perform a 25-year old yet still insanely relevant work of art such as The Normal Heart, by Larry Kramer. I first read The Normal Heart during my summer break in 2005 (I think) when I was in the (expensive) habit of going to The Drama Bookshop every few weeks and buying $40-$50 worth of plays to read, only going back when I’d finished all of the previously purchased ones.  I picked The Normal Heart because I’d heard it was amazing and also because The Public Theatre had produced a production in 2004, starring Raul Esparza, which I’d been sad I’d been unable to see.  I’m happy to say that The Normal Heart is still effective even if you’re just reading it.

Last night’s performance benefited the Actors Fund as well as Friends in Deed, an extraordinary crisis support group created by Cy O’Neal during the AIDS crisis.  The cast included Glenn Close, Joe Mantello (onstage for the first time since the early 90’s when he was in Angels in America on Broadway), Victor Garber, Jason Butler Harner, John Benjamin Hickey, Jack McBrayer, Michael Stuhlbarg, Patrick Wilson, as well as the previously unannounced Michael Ceveris and Santino Fontana.  All powerhouse actors and on the same stage, there was no doubt in anyone’s mind that they were going to bring the house to tears.

The Normal Heart is a semi-autobiographical work about the beginning of the AIDS crisis in New York City and the creation of the first HIV advocacy group, led by gay Jewish activist Ned Weeks (loosely based on Larry Kramer himself).  (On a personal note: Weeks reminded me a lot of myself because we’re both hot-headed with tempers – so I felt for his battle with himself when his board members and friends were telling him to cool it.)  The audience watched Weeks fall in love, create this group, and then lose both.

The federal and state level government’s refusal to acknowledge the epidemic is on full display during the two heart-wrenching acts as the audience watches the homosexual community once again become ostrecized and sex between two men once again is called “dirty."  It’s only when cases pop up in more than 15 American cities, as well as Africa and parts of Europe does the group get a meeting with the New York State governor’s assistant (played by Michael Cerveris), who ultimately can’t do anything for them.

Joe Mantello gave the performance of the night by far, with Glenn Close, though shakey and almost glued to her script in the first act, really delivered in her character’s 2nd act monologue.  Michael Stuhlbarg, although overacting at times, gave an overall great performance.  Victor Garber, as Week’s older brother, isn’t given much to work with, but does the most he can with what he had.  Patrick Wilson was also genuinely and engaging, especially during his monologue in the second act about his partner dying and being tossed outside a hospital in a garbage bag.  Michael Ceveris and Jason Butler Harner were also great, though both also didn’t have much to work with.

The surprise performance of the night (aside from Mr. Mantello) was Jack McBrayer, as one of the group’s young founding members who was appropriately empathetic and sympathetic at all of the right moments, and it was easy to believe that he genuinely cared.  Josh Benjamin Hickey also gave an unbelievable performance as Week’s partner, Felix.

The set was simple – nine chairs placed in a semi-circle around the stage, with a white backdrop with the names of those who had lost their lives to AIDS.  Joel Grey directed beautifully and not much I think would (or should) be changed if there was ever a re-mounting of this brilliant piece.

Sobs were being stifled by the dozen in the Kerr last night at the end of the second act.  A truly important piece of theatre, and everyone in that theatre who hadn’t seen it before was unspeakably lucky to see it last night.