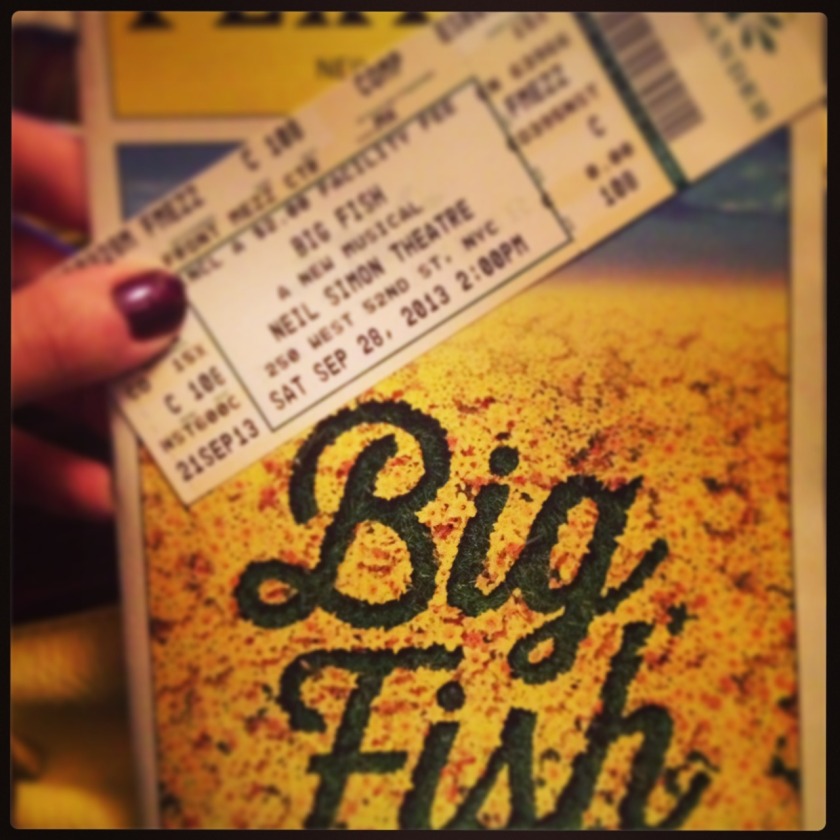 Last Saturday I was invited to see the new musical based on the movie Big Fish after winning a contest that was held on their website. I was incredibly excited because I remember liking the movie (when I saw it in theatres back in 2004!) and the cast was phenomenal: Norbert Leo Butz, Bobby Steggert, and Kate Baldwin. Tonight: Big Fish opens!

I didn’t really remember what the movie was about, but I heard it was a touching father/son story. A man who’s father has always told him phantasmagorical stories is dying and before he passes, he wants to find out the truth about his father’s past.

The first thing that stood out to me were the costumes (design by William Ivey Long) – they were gorgeous and somewhat magical. My next favorite aspect of the show? Norbert Leo Butz (and his dancing). He was fantastic in Catch Me If You Can, and he lives up to and surpasses every expectation in Big Fish. He weaved in and out of being a teenager and a dying old man with such ease. Kate Baldwin and Bobby Steggert also, of course, didn’t disappoint either. Baldwin weaved as easily from teenager to senior citizen as well, and Steggert has it easiest (as he never had to make any huge age leaps) but was still a joy to watch discover the truth about his father.

The score is enjoyable, the choreography fantastic, and supporting cast was lovable. Remember how I said this was a heartwarming father/son story? Well: it was. Everyone around me was crying at the end and I even choked back a tear.

I hope lots of legs are currently breaking at the Neil Simon and the reviewers are warm. Big Fish is definitely a welcomed addition to this Broadway season!