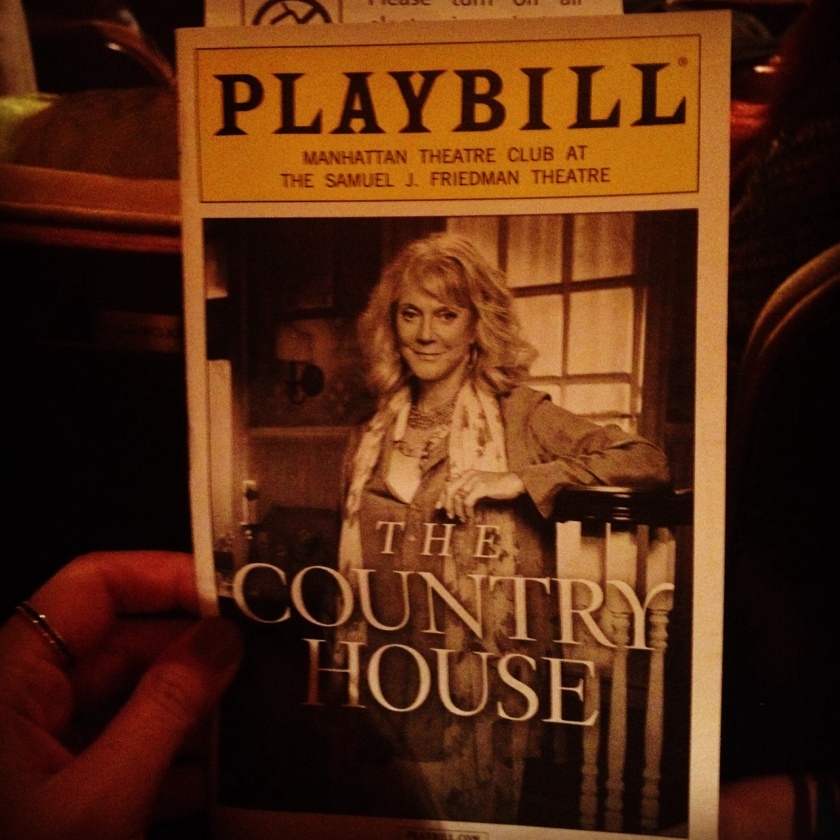 The Country House, by Donald Margulies, opened a couple of weeks ago to stellar reviews at the Samuel Friedman Theatre. It was about a bunch of actors (a family, multiple generations) who gather at their summer home to honor the death of the mother of the family who passed the year before.

There were tons of funny and meaningful one-liners in the first act, but the first act ended with a cliche moment that was only meant to give the playwright a reason to write a second act.  While I enjoyed the first act a lot, it was obvious Margulies had no idea where to go in the second act. It had a few moments, but it was pretty pointless.

The performances were great though: Blythe Danner was wonderful as the famous dame of the family, Daniel Sunjata was wonderful and a bit sleazy as Michael Astor (the famous TV actor who needed a place to stay), and Sarah Steele was probably my favorite, as the Danner’s granddaughter, and the only one in the family who wasn’t in show business, Susie. I’ve seen her in many shows and she’s always fabulous and this performance was no different. Kate Jennings Grant was also endearing as the new wife to Walter (the funny David Rasche), who was obviously a little uncomfortable being there.

Although it had it’s moments, MTC has produced more focused work in the past and I can’t wait to see what they have in store next. 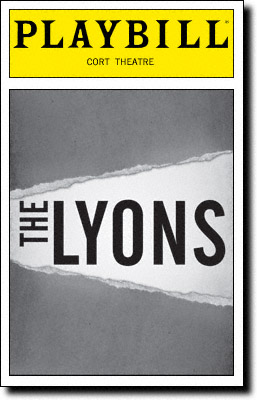 Lots of people laugh at the top of the first act of The Lyons. Half of those people are laughing at the ridiculousness of what Linda Lavin says, while the other half are laughing because they had, or have, a Jewish grandmother exactly like Rita Lyons. I knew nothing really had changed about the script, but I was excited to see The Lyons again after it was announced that it was transferring from it’s small stage at the Vineyard in Union Square.

The Lyons is about absolutely nothing other than a dysfunctional upper-middle class family in which all of the members are dysfunctional in their own unique ways. Is it entertaining? Oh, yes, you will keel over laughing. Linda Lavin and Dick Latessa, as Rita and Ben Lyons, bicker and you can’t help but laugh at the absurdity. Have you ever wanted to hear Dick Latessa yell “motherfucker”? Well, then this is your show. Rita is redesigning their living room while Ben is in a hospital bed dying from cancer when their two equally as dysfunctional grown children show up.

Brother and sister Lisa Lyons and Curtis Lyons, played respectively by Kate Jennings Grant and Michael Esper, each have their own problems, including alcoholism and compulsive and delusional lying.

Their lives have all crumbled by the end of the second act, except for Rita’s, and we’re left with Rita proclaiming, “You can wish me bon voyage, or you can go fuck yourselves.” Motherly love at it’s best, indeed.

Performances are fantastic throughout. Esper is pitiful, humorous, and creepy (though not all at the same time), Grant is a frantic mess, and the two supporting characters the nurse and Brian, the real estate agent, played by Brenda Pressley and Gregory Wooddell are comical and sad respectively.

It goes without saying that Linda Lavin and Dick Latessa are masters of their crafts and therefore own the stage with ease. The Lyons is hysterical and appalling at the same time, on any sized stage. 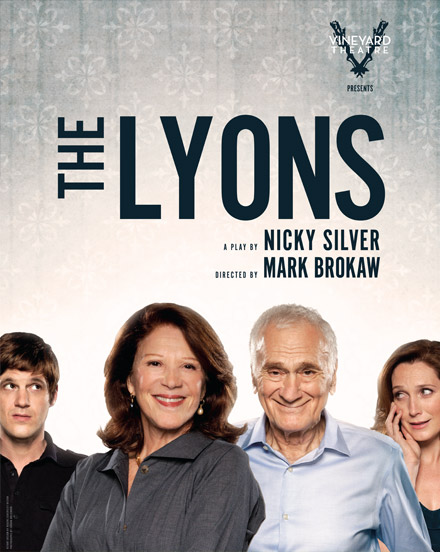 In between marching up Broadway and rallying in Times Square on Saturday, I stopped by the Vineyard Theatre with a friend to see Nicky Silver’s new play, The Lyons.  Of course I was drawn to the show because of Michael Esper, but also because the Vineyard is a solid theatre company that I’ve been a fan of since 2004.

The Lyons beings in the hospital room of a man (played by the incomparable Dick Latessa) dying from cancer and his wife (hilariously played by Linda Lavin), who is trying to decide how to re-decorate their living room even though, as Lavin says, her husband “won’t be around to see it.”  Eventually their two children (Michael Esper and Kate Jennings Grant) arrive and are told the news that their father is dying.  Secrets are revealed, family members are betrayed, and in a shocking turn of events, Lavin has some pretty big news for her children the week after their father dies.

Some theatre fans could have their dreams fulfilled after The Lyons when they’ve finally heard Latessa exclaim, “motherfucker!” multiple times. The first rate cast gives solid performances all around.  I always love watching Michael Esper in whatever role he takes on, but he was especially breaking in Act 2 of The Lyons.  I don’t want to give away too much of the plot, but The Lyons is definitely worth a viewing.

The Lyons is playing at the Vineyard Theatre on East 15th Street through November 20th. Click here for more information.