The Friday before I saw Aladdin, I was finally able to see The King and I at Lincoln Center. The show is slow and old, but it’s lovely and the score is great. The cast is HUGE. There are SO MANY kids on that stage. I would hate to be a child wrangler for that show.

But Kelli O’Hara was lovely, as always, and totally deserving of her Tony Award. Jose Llana was the king and I think he’s great, but he didn’t come off as powerful or confident enough to be a king. I wish I could’ve seen the original.

The set is huge and great to look at and it’s a great, great production. I’d highly suggest taking in a performance even if your thing is rock musicals and not Rodgers and Hammerstein’s (like me). 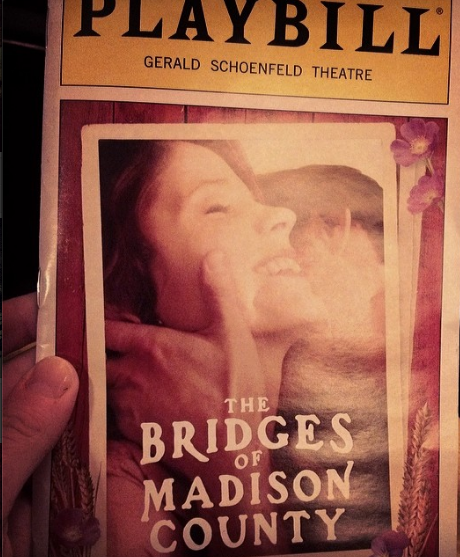 The new musical The Bridges of Madison County opened this week to pretty good reviews. I was lucky enough to secure a ticket one night last week and I was excited. I hadn’t seen Kelli O’Hara in anything since Piazza and she’s lovely so this was exciting. Also: Steven Pasquale is a person with one of the dreamiest faces and prettiest voices out there.

Everything about Bridges is beautiful. The score, the cast, the minimal set, and especially the lighting. Man, is the lighting beautiful. I enjoyed hearing the story for the first time. Although it was pretty cliche, very sad, and got extremely dark at the end, which I totally didn’t expect, I still enjoyed watching it unfold. I was surprised yet relieved with the choice she made at the end.

The cast is wonderful. For the part they’re wonderful actors with beautiful voices.

What didn’t I love? The complete lack of chemistry between Kelli O’Hara and Steven Pasquale. Kelli is a great actress (we all know this) and I thought Steven might be too. But I didn’t believe they liked each one tiny bit. This huge passionate love affair that we’re supposed to be witness to onstage? It looked like two people who weren’t really interested in each other that had to kiss so they could get their paycheck on Friday.

But somehow, despite not believing the two protagonists were into each other, I still enjoyed it. Which is a total testament to Jason Robert Brown’s writing. It’s as close to a traditional musical as we’re going to get (it does run a strong 2 hours and 45 minutes) and it could even be called good. 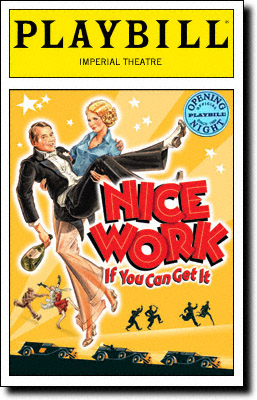 After much internal debate, I gave in yesterday and saw Nice Work If You Can Get It. I went into it with an open mind, with most people having told me that it was a good show, a cute show, and not that bad, with only one “it was awful” from a good friend. The cast was top-notch: Matthew Broderick, Kelli O’Hara, Judy Kaye, Jennifer Laura Thompson, and Estelle Parsons comprised a majority of the leads. George and Ira Gershwin are American legends, so I knew what the music was going into it. The only thing I didn’t know was the plot.

I was so terribly bored during the first act. The plot (boy meets girl, they fall for each other, but the boy is already married, and the girl is a con artist) was thin and most of the songs chosen to flesh it out barely moved the plot forward at all. The second act was unquestionably better though, though I can’t pinpoint why. I think it was because I liked the the wrap-up of who everyone was. Also: Judy Kaye gets “drunk” and sings while swinging from a chandelier.

The choreography was very good (though I still think Newsies’ and Evita’s were better) and the company was fantastic. Broderick can still sing and dance with ease, but his acting was phoned in (though it’s not like his character was complex or well-written enough to need any depth). O’Hara sings well and acts her slightly better written character convincingly, but she does better when she’s given better material to work with. Kaye was entertaining in her role and if it weren’t for her easy competition for the TONY this year, I don’t think she’d be a shoe in. But considering that her competition is the star of a show that no one saw and a violinist with two lines, among others, she probably has this one in the bag. Thompson played her usual character that she plays in every show she is cast in (though she does it well), and Parsons is entertaining in her small role. My personal favorite was Chris Sullivan, as Duke Mahoney, a bootlegger. He was vocally talented, and also endearing.

Nice Work will run for a while because of the cast and also because of the baby boomer generation that loves the Gershwins. It has it’s moments, but even with an open mind, it couldn’t win me over.