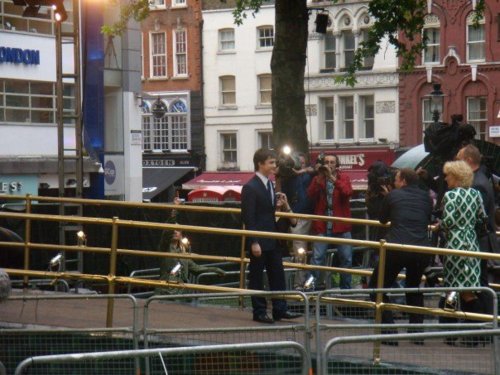 I know the final Harry Potter movie just premiered in London, so I wanted to post a picture that I took in June 2007.  This is from the Harry Potter 4 premiere at The Odeon in Leicester Square, London.  It’s none other than Daniel Radcliffe himself (incase you couldn’t recognize him).

I’ve never been a Harry Potter fan – for some reason I could never get into it.  I watched the first movie and was never motivated enough to watch the others.  Despite that, I went with my friends that day in 2007 to watch the arrivals because why not, right?  I was in London and it was free!  I would’ve been stupid not to go.  The final book was also released at midnight the night before we were all scheduled to leave.  We booked it up to Waterstone’s on Kensington High Street after being out at the pubs and picked up copies.  I brought back a copy for myself (again, why not?) and a copy for my family in Maine who are huge Potter-heads.

I shoved them into my huge duffle bag and they made it onto the plane the next day and back to New York safe and sound.  I’ve still never read it.

I was looking for my Anything Goes cast recording recently (I think it’s about time I get reacquainted with the score because of the impending Roundabout revival on the way) and I discovered I have a load of recordings I’d forgotten about.  I also discovered that I have no idea where my Anything Goes recording is.  Anyone have it?  Take a look and message me if you want me to upload any of them for you.

In 2007, I was studying abroad in London and my school threw us a party at The Phoenix (if I remember correctly, it was near Leicester Square).  I felt kind of cheesy celebrating the Fourth in London, so we renamed it “The Day They Got Rid of Us Party.” I think I remember leaving our back room in the bar and drinking a large portion of a bottle of wine with my friend Emily…

In 2008, I found myself in Florence, our third and final stop in Italy on the tour I was on as a graduation present to myself after graduating.  It was our final night and we went to a club called (as far as I can remember), “Discoteque.”  I probably massacred both the name and the spelling.  I think there were many American tourists there that night because they released red, white, and blue balloons during the night (see above), and there was karaoke’ing on the bus ride there to “Born in the USA” (see above).  Many good drunk times were had.

I could not remember what I did in 2009 for the Fourth of July.  Then when someone mentioned the fireworks to me, I remembered watching them last year… on the TV at Destination.  That’s all I really remember.

This year my friend Lindsay is throwing a picnic in Central Park and then some of us might go see what the crowd is like on 59th and 12th (because one of our friends wants to see the fireworks in person very much, and I’m really awesome and getting through crowds).

The above photo is AMAZING.  It’s from the end of Green Day’s (supposedly epic) concert at Wembley Stadium in London last Saturday night.  I’ve been perusing the thread on GDC and this picture was up there.  It’s not mine, but it’s too awesome not to post.

This is the BFI IMAX – it’s on the Southbank side of London (next to Waterloo station / end of Waterloo bridge). Best bit of theatre marketing EVER! Dewynters done good! 😀 (via fuckyeahhairtribe)