When The Newsroom was filming it’s last season (RIP, sadface), I went and watched them filming one tiny segment outside the ACN (aka the BOA building on 42nd and 6th) building one night. This is the part after Charlie has a heart attack and is being rush to the hospital (obviously). They shot this take so many times. I know that’s how they film in TV and movies, but still… it’s mind boggling.

In between takes I was tempted to run across the street and hug Thomas Sadoski and Olivia Munn.

But I did not.

Tonight I met my friend Ben at the Edison Cafe for what may be the last-ever Chanukah spent at the Edison Cafe. We got in, sat at our usual seats at the bar, and ordered two bowls of matzo ball soup (duh) and latkes (duh).

Our server made a face and said, “OOOOH. We might be out of latkes, hold on.” I may have made us leave if they were out, but…

We got the LAST order of latkes in the Edison Cafe. They were out of potatoes after that.

This is happening tomorrow, starting at 10am. There will be politicians there, like Gale Brewer, the Manhattan borough president, and there will be a press conference. I look forward to the blintzes!

I am now “Playbill Famous,” thanks to my friend Matt. Just click the above link.

Broadway Stars and Signs of Support; Hundreds Turn Out at Lunch Mob to Save the Cafe Edison

Last Thursday Jeremiah Ross of Vanishing New York broke the news that the Edison Cafe in Times Square was losing it’s lease and being kicked out. The theatre community responded and loudly. It is a regular hangout for many actors, stage hands, producers, etc. I’ve spent lots of time there in the past. What comes to mind first are the fourteen Monday evenings that I spent there in 2011 with my classmates in the 14 week Commercial Producing Intensive, along with our leader Jed Bernstein. We ate lots of matzos soup and talked about class, theatre, and life.

And most recently I went there with friends before we saw Cabaret on the first night of Rosh Hashanah in September. One of those friends, Ben, was crushed by the news and notified me the second he found out about the Saturday Lunch Mob that was being organized. Of course we’d go.

There was a line out the door to get a table but we slid up to the bar, ordered matzos ball soup, coffee, and blintzes, and watched the chaos around us. There were cameras there, reporters, patrons walking around with signs, and regular at the bar. I spoke to a couple while waiting for Ben’s arrival and they were just gutted.

The Edison Cafe is the last affordable place to eat in Times Square that’s not a hot dog stand. Their matzos ball soup is ridiculous and way cheaper than the $15 bowl at Junior’s. Their lease is up on December 27th, so we have about a month and a half to save this New York landmark.

New York’s immersive theater scene has outdone themselves yet again. I was offered a ticket to The Queen of the Night last week and immediately jumped. Think Nutcracker Rouge meets The Great Comet of 1812 minus the literary source and Christmas. That’s what The Queen of the Night is. Or in other words: it’s a super erotica circus with a few dance breaks.

The entire night lasts about 3 hours. There’s about an hour of pre-show where you’re encouraged to go just walk around the space and explore, and if you’re lucky a cast member will pull you away and show you something neat that you hadn’t yet discovered. Some people were whisked away to meet the Queen who was standing on the stage for most of the pre-show.

Once the show begins, all of the chairs that are messily piled onstage are ripped down and put around the tables that are scattered around the stage. I had been told to sit at a certain table by a cast member, so like an obedient audience member, I listened.

After the story is introduced and there’s some impressive stuff onstage, they bring out huge platters of food that includes lobster, a rack of ribs, a full roast pig, potatoes gratin, kale salad, bone marrow, and of course, wine. Oh, and two vegetarian options which were roasted cauliflower and some mushroom dish that I didn’t try. We were served the rack of ribs at first but then encouraged to go to other tables to try what they had. Such a cool idea! Definitely a way to make the audience socialize.

After eating and another section of the show is performed, the cast rolls out huge white containers and tells us to throw out plates and everything on the table in them. That’s one way for a quick clean up!

Just so you know: You will get felt up, kissed, fed, and used (in the show).  I was singled out to be the girl who refuses the crazy character’s proposal for a happy ending with him (as in marriage, not an orgasm). I won’t lie – I loved the moment that we had in the spotlight. And then we danced again at the end of the show. I’m glad i listened to that one cast member on where to sit!

After the two main couples of the night get together and all is well, everyone dances (including the audience) and then cast members are lined up in various spots around the nightclub with lots of spoons and the most decadent chocolate cake you’ve ever tasted. As evident in the above photo, they feed it to you.

This is a definite New York experience to be had if you can deal with being touched by more strangers in one night than ever before. Tickets are not cheap but they’re definitely worth the price. 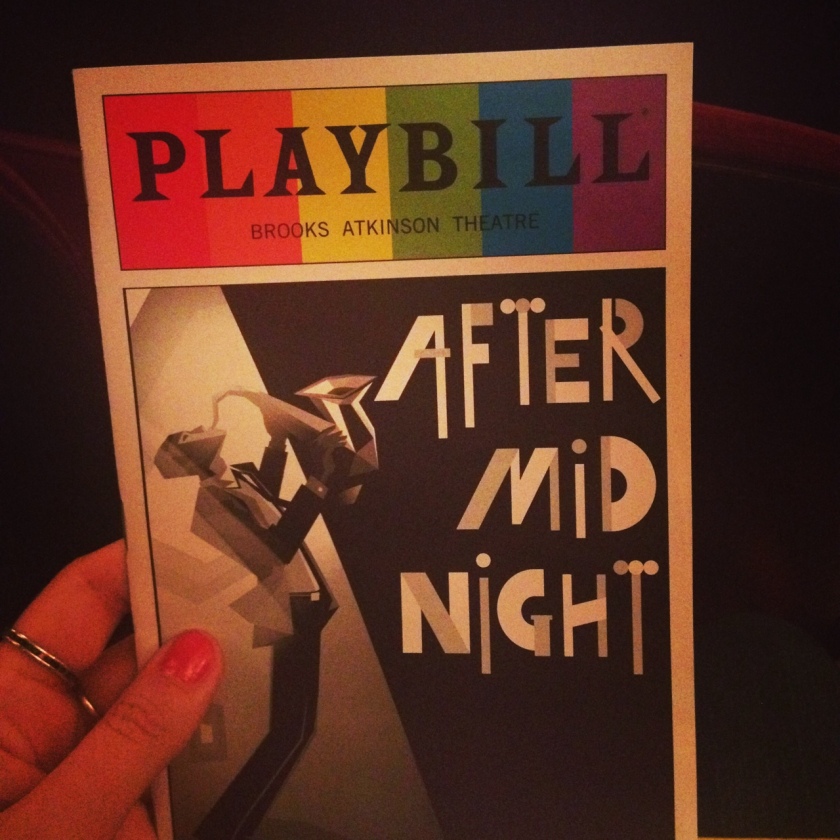 Two weeks ago I got to see After Midnight, a dance revue playing at the Brooks Atkinson Theatre. Patti LaBelle was the current star and Dule Hill is always fabulous, as is Adriane Lenox, so I said why not!

It definitely deserved it’s Best Choreography TONY Award as the dancing was some of the best currently seen on Broadway. The singing was fabulous and it wove several different stories together which all came together at the very end, which I always like.

The cast was uniformly talented and did things with their bodies that you wouldn’t believe was possible. It’s a 95 minute journey back to old Harlem and the music of the day.

A few weeks ago I saw Lady Day at Emerson’s Bar & Grill at the Circle in the Square Theater starring the magnificent Audra McDonald.

I knew nothing about Billie Holiday, nor did I know most of her song catalogue. It was all really pretty music and it was interesting to learn so much about this musical icon.

Although McDonald is fabulous in everything she does, this included, but I left this show asking the same thing I did after End of the Rainbow, “Why?” As in, what was the point?

I have no idea but I’ll just think of this a music history lesson and consider myself incredibly lucky to see Audra McDonald onstage again.

Everyone here knows that Adam Rapp is one of my favorite playwrights. i’ve seen 99% of his work that’s been produced in the city since I saw Red Light Winter in 2006. I wasn’t sure I’d be able to make his reading/talkback/signing about The Hallway Trilogy at the Drama Book Shop today, but luckily we packed it in at a decent hour at work and I ran two blocks over.

He’s very visibly not entirely comfortable speaking in public, which is expected because he’s a playwright, not an actor. He looked down most of the time, avoiding eye contact. He read a short passage with the woman from the Theater Communication Group from The Hallway Trilogy, answered several questions about the genres he writes about, the characters he often writes, and a few questions about The Hallway Trilogy itself.

Then Nick Lawson and the actress whose name I can’t remember came up (there was actually a number of cast members from the off-Broadway production a few years ago in attendance) and read part of a scene from Paraffin (the second in the trilogy). Afterward he took more questions and I asked if he will ever write for Broadway, knowing that he’s turned down Broadway before because it’s not where his audience is. He said he’s turned down Broadway twice and since the New York Times is not a big fan of his, he doesn’t think there are any producers who’d take a chance on him anytime soon. (He jokingly said that he needs to wait for new critics to come to the Times.)

Afterward he signed copies of his plays so I bought a copy of The Hallway Trilogy (because it’s an awesome body of literature, duh), asked him a few questions about Red Light Winter on screen (he hopes they’ll start filming in January), shook his hand, and headed out.

My office was closed today but I’m taking a staycation this week anyways. I’m doing all sorts of awesome-sauce stuff like seeing shows, going to yoga, and going to whatever coffee shop has room for me (among other things).

I also went down to Rudy’s in Tin Pan Alley (aka 48th between 6th and 7th) today to visit my friend Dave. He knows I love pink so when I walked in, he immediately pointed me towards this pale pink, electric-acoustic Gretsch (I think that’s the maker). It’s only $1295! He took this picture and later posted it on Facebook asking the world to “give this girl $1400 so she can buy this guitar.”

I don’t think anyone’s responded with “Yes! Here’s some cash!” yet, but a person can dream. It was a really, really nice guitar.