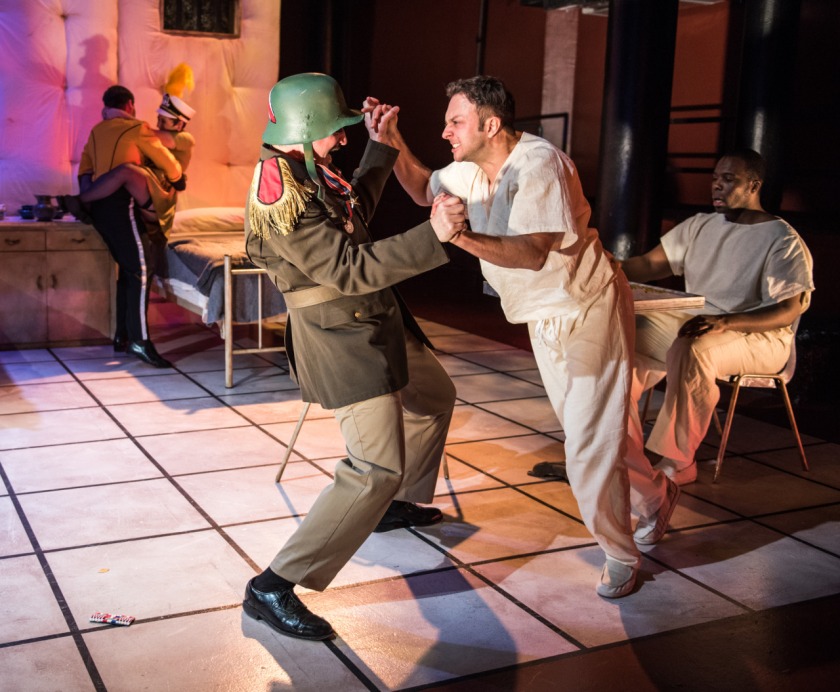 Last weekend I was invited to see No-Win Production’s staging of WOYZECK, FJF at the New Ohio Theatre on Christopher Street. It was a re-telling of a modern classic by Georg Büchner. The Amoralist’s James Kautz (second from the right above) was starring as Woyzeck so I was excited.

It was good. I think I understood most of what happened and it reminded me a lot of the movie Shutter Island. Woyzeck is a former soldier (I think he was a soldier) who has now been institutionalized and is trying to sort through his past to figure out how he got there. It reminded me of Shutter island because he gets part of his brain removed and then I think it starts (or would, if the lights didn’t fade to black) all over again (his journey to discovery, that is).

Kautz was fantastic and moving. The rest of the ensemble cast is also great, including Evangeline Fontaine, Mackenzie Knapp, Alessandro Colla, Isael McKinney Scott, and Jason Wilson. Director Jeremy Pape does an excellent job making use of his very small space for many scenes and lighting designer Evan Roby designed some very effective lighting.

Woyzeck, FJF is dark and compelling. It plays through March 21st. More information can be found here.

Last Friday I was invited to see Sinking Ships Production of Powerhouse, a new work based on the life of Raymond Scott. Powerhouse played to sold out crowds at the 2009 Fringe Festival, was extended, and won an award for Outstanding Ensemble.

Powerhouse is comprised of seven incredibly talented performers. The story of Scott and his family is extremely compelling, and even heartbreaking at times, as we follow him on his journey to basically start the electronic music genre. This oftentimes forgotten musical genius contributed so much to swing and electric music and it’s nice to see him getting recognition, even if it’s just in a small theatre downtown.

While I didn’t love it, I certainly thought it was worth a viewing if you like things like indie theatre and swing music.Powerhouse is playing now through November 23rd at the New Ohio Theater on Christopher Street. More information can be found here.