My dad posted a link to this article from the New York Times on Facebook today. It’s called Whisker Fatigue, and it’s the reason why your (and my!) cats might have “eating issues,” aka they take their food out of their bowls and eat on the floor.

I’ve always noted that Gus takes his food out of his bowl and eats it off the floor. I never thought anything of it because other people have said their cats did the same thing. BUT! It’s not just a cute cat quirk, it’s an actual medical thing that is resolved by using shallow food dishes to feed them. Whiskers are little antennas and so you can imagine they’d be bothered if they were constantly smooshing up against the side of a bowl while they were eating. They supposedly get anxious and apprehensive because of this.

That’s Gus. See Gus’s whiskers? They’re really long for a little cat. So, being the doting cat mom I am, I went out to my local indie pet store to buy new food bowls and when they didn’t have them, I purchased these on Amazon.

Hopefully he’ll stop spilling his food onto the floor when the new dishes come. I just wanted to pass on my new found cat-related wisdom.

Of course it does.

I feel like I keep seeing these New York Times’ and Curbed articles about people who love the Upper West Side. And then I feel extremely grateful that the prior few bidders on my apartment didn’t know how to fill out a board application and I was – or my broker was, to be clear, because that shit is complicated.

I live within a couple of blocks of the water and two massive parks. I live two blocks from the best bagels in the city (not my words, everyone else’s), I have some awesome bars, Columbia’s sprawling, green campus, an adorable independent pet store that comes complete with an adorable pet store kitten, Book Culture, The Hungarian Pastry Shop, and a Trader Joe’s, Whole Foods, and Westside Market. And lots of trains.

I love my ‘hood and I am very fortunate to be able to live here.

And if I have the means, I’m never leaving.

The Upper West Side Wins

I found these photos in my Tumblr archive recently and thought they should be shared. These are photos from the time Wes Craven did a talk at The New York Times building during Halloween 2010, a few months before SCREAM 4 was released. I was excited but probably more apprehensive for the next, in my opinion unnecessary, edition.

This was a cool talk and my friend and I met him after briefly. I have a production photo of him and Neve Campbell from the original Scream hanging in my apartment now (or at least it will be, whenever I get around to hanging it).

The horror world misses you, Wes.

I’ve mentioned before about my work with The Broadway League administering demographic surveys at various shows. It’s a super cool perk because not only do I get paid (not a lot, but who cares it’s nice anyways), I also get to see the show for free. In an industry where the average ticket price is hovering around $100 (and most of the offerings aren’t worth half that, if you ask me), that’s a pretty sweet deal.

They released their 2014-2015 findings based on the reports that we helped get out and here are some of their findings:

The average age of a theatre-goer is 44. This has been the norm for a while and the industry is constantly trying to find new ways to lower this. If they don’t, the industry will be in trouble because the people who are 44 now are eventually going to die and people need to be recruited to replace them.

68% of audiences are women. Yup, this is another norm. This is why shows are often marketed towards women. They’re the ones making the decisions about what to buy tickets for.

Over 50% bought their tickets online. Someone tell Telecharge to update their mobile presence ASAP.

80% of theatre goers are Caucasian. This is another problem, because soon Caucasians won’t be the majority anymore.

The most popular reported sources for theatre information were Broadway.com (um, tourists), New York Times (the regular theatregoer, and poised New Yorker, checks this site), and Ticketmaster (wait, what? This is just a few sad and confused individuals).

I just thought some of this was cool. There are major issues that the industry needs to work out but I have faith they will. It’s either they figure their shit out or they’ll keep raising ticket prices so that only a handful of tickets need to be sold to cover a show’s running costs and only millionaires can afford them. 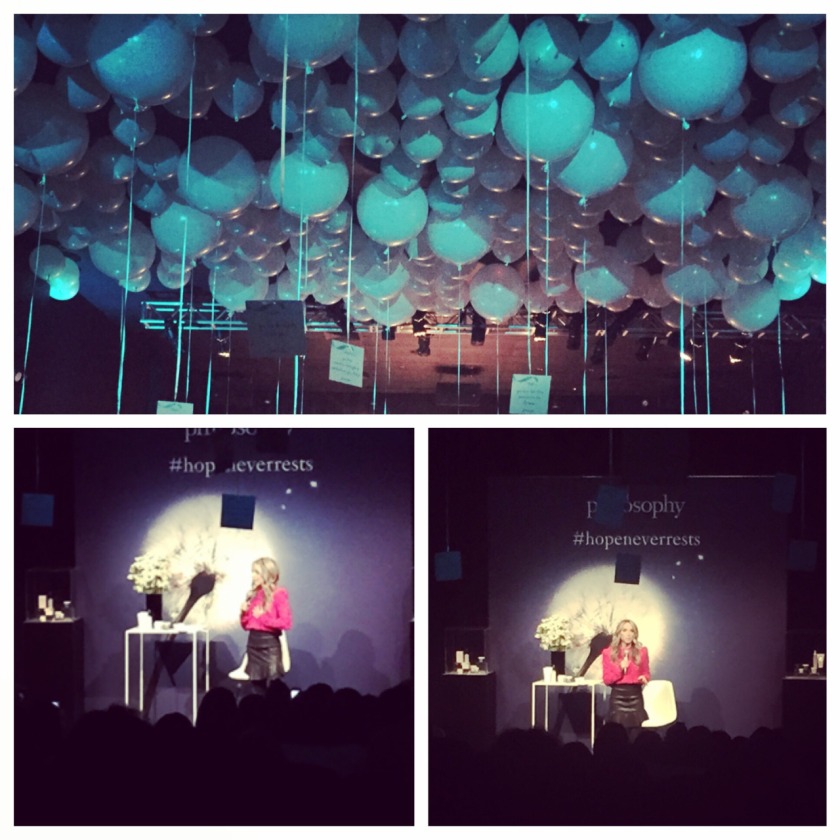 Dwell in the feeling of what it is that you desire.

I’m not sure how, but I received an email from someone in Gabrielle Bernstein’s camp last week about an hour-long lecture that she was giving with Philosophy, and after checking my schedule, I happily RSVP’d.

I arrived a tad before 6pm, not remembering that it was first-come, first-serve, and I was at the end of a long line. They told us at the back that we probably wouldn’t get in as they were at capacity, but I stuck around with a few others anyways. You could say we willed ourselves in because just before the event started, fire codes be damned, and they let the few us that stuck around stand in the back. Total win.

Lots of my friends who read this will probably roll their eyes at the granola-y vibe of what she spoke about and that’s fine. Roll your eyes and keep living your life how it suits you. I digress!

Gabby Bernstein will always be my favorite. She spoke about manifestation and vision boards, of course. We meditated. She said the number one key to manifesting is to put what you want out there into the universe and then chill. Because the energy of being a maniac and trying to get something, anything, will drive it away from you. She also said to pick a sign and ask for it and ask for it often.

I needed this talk and I took this advice to heart with my search for the perfect(-ish) job. Every now and then I get into panic-mode about my job and that helps exactly no one.

So, pick a sign and chill out. Oh, and meditate. Always meditate.

I think the New York Times published this in an attempt to decrease the population because who honestly would be like “yay kids!” after reading it? This survey should be called, “No Shit, Sherlock” because here are their astonishing findings:

And yet thousands of people sign up for this never-ending-load-of-stress every year. I’m not saying it doesn’t have it’s benefits for the right person (I mean, who better to pick out your retirement home than the person who you tried to control for the first 18 years of their life?!), but come on. People who have kids in their twenties, unless they’re rich, are just begging to die an early death.

Life is stressful enough as is. At least establish yourself in your career and try to have some sort of a stable life and income before you go dragging down another life or two into it.

Stressed, Tired, Rushed: A Portrait of the Modern Family 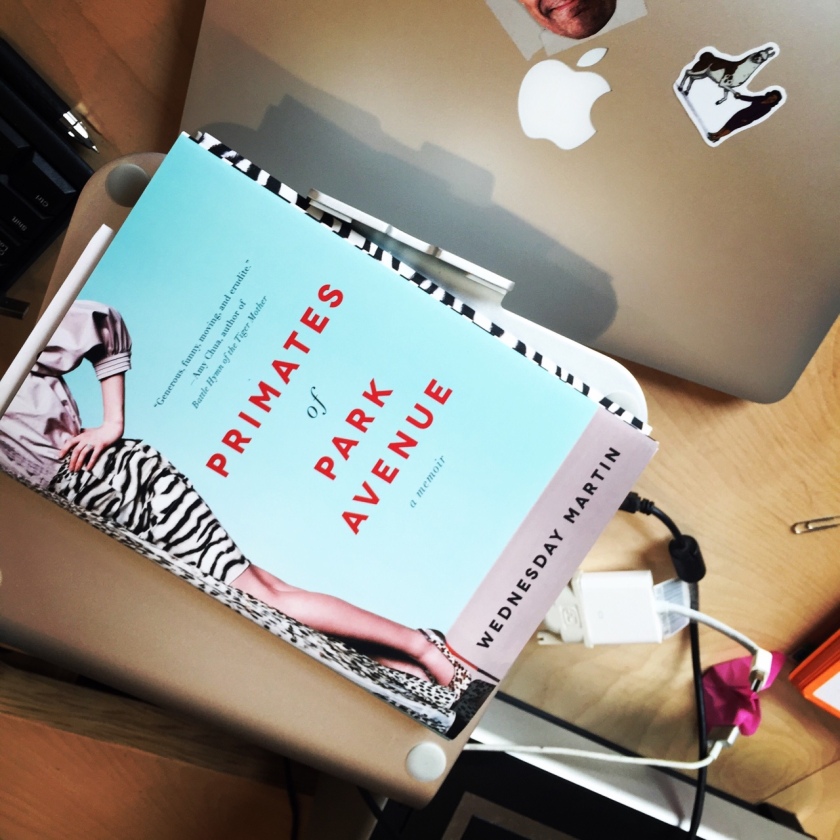 I got back to the office on Thursday after a 6-hour HR conference and our literary editor had left this on my desk. I was SO excited. After reading all the press about it, I started it that night and I’m more than halfway through it. It’s incredible. Martin is SO smart, yet somehow gets lot in this shit.

I sat down on the train tonight on my way home from the Bohemian Beer Garden in Astoria and I accidentally kicked the man sitting next to me when I crossed my legs. I immediately apologized and he said, “No need to apologize. You only have to apologize if you want to be one of those women. Absolutely disgusting.” I laughed and agreed with him, telling him that I aspired to be like them 0%. But then I wasn’t sure if he was being anti-feminist or pro-feminist.

I’m going to assume that he supports powerful women, not just those who live off their “wife bonuses.”

Am I the only person who didn’t know she had officially ‘left the industry’? I just thought she was doing other things – or I just didn’t really think about where she was at all.

It was an interesting read and good for her for making that choice and relocating. Although she is awesomely talented, there are probably 150 other girls out there who are just as talented and waiting to take her spot so to say we “lost” a star is a bad way of looking at it. She gave another star out there a chance to shine, one who’d really appreciate it. At least for the time being!

The Broadway Star Who Got Away

This is to all the doubters and deniers out there, the ones who say that heaven on Broadway does not exist, that it’s only some myth our ancestors dreamed up. I am here to report that a newborn, old-fashioned, pleasure-giving musical has arrived at the Eugene O’Neill Theater, the kind our grandparents told us left them walking on air if not on water. So hie thee hence, nonbelievers (and believers too), to “The Book of Mormon,” and feast upon its sweetness. – Ben Brantley

It’s opening statements like that which are the reason why Brantley is paid the big bucks and has a desk at the New York Times.  Every theatre geek has been waiting for the reviews for The Book of Mormon to be released since before it came to Broadway.  Well, here they are and they are raves.  I’ve been reading a few other publications here and there, and a few are negative, but those are from pretty inconsequential papers (what theatre fan actually turns to the Financial Times to read a review? Yeah.).

I am happy to say that Brantley got the show.  One hundred and ten percent.  It’s a show with a huge heart, the kind of show your grandparents grew up with, only it has a dirty mouth.  Everyone else who gave it a positive review also got it.  Those who didn’t, like that of The Star, were upset that it wasn’t meaner towards to Mormon religion.

Someone pointed out that there has been almost no footage released from the show with regards to commercials or online advertisements, and no television performances either.  I think it’s a very smart move because oftentimes it’s best to go into a show with no expectations whatsoever and the team of The Book of Mormon are allowing you to do just that.

Now go forth, and buy your tickets.

Missionary Men With Confidence in Sunshine (via NYT)

The first dish I tried making was from a recipe I found a few weeks ago in the New York Times.  I left out the onions, and it’s basically a simple baked pasta, but it was good!  As evident by the above photo, it was difficult to snap a picture that didn’t make the food look gross.