Last Saturday I was invited to see the new musical based on the movie Big Fish after winning a contest that was held on their website. I was incredibly excited because I remember liking the movie (when I saw it in theatres back in 2004!) and the cast was phenomenal: Norbert Leo Butz, Bobby Steggert, and Kate Baldwin. Tonight: Big Fish opens!

I didn’t really remember what the movie was about, but I heard it was a touching father/son story. A man who’s father has always told him phantasmagorical stories is dying and before he passes, he wants to find out the truth about his father’s past.

The first thing that stood out to me were the costumes (design by William Ivey Long) – they were gorgeous and somewhat magical. My next favorite aspect of the show? Norbert Leo Butz (and his dancing). He was fantastic in Catch Me If You Can, and he lives up to and surpasses every expectation in Big Fish. He weaved in and out of being a teenager and a dying old man with such ease. Kate Baldwin and Bobby Steggert also, of course, didn’t disappoint either. Baldwin weaved as easily from teenager to senior citizen as well, and Steggert has it easiest (as he never had to make any huge age leaps) but was still a joy to watch discover the truth about his father.

The score is enjoyable, the choreography fantastic, and supporting cast was lovable. Remember how I said this was a heartwarming father/son story? Well: it was. Everyone around me was crying at the end and I even choked back a tear.

I hope lots of legs are currently breaking at the Neil Simon and the reviewers are warm. Big Fish is definitely a welcomed addition to this Broadway season!

I still didn’t make it to see Elf this year – but I’m not too sad about it. I am sad I didn’t get to see Dead Accounts because: Norbert Leo Butz. That’s why.

A friend of mine invited me to see Chaplin last Thursday, so I got to see it once more before it closed. I honestly enjoyed that show. I’m not sure how it got such a bad wrap, but that was unfortunate. I hope Rob McClure gets at least a TONY nomination. Grace was meh. And War Horse was just an incredible theatrical experience, but it was Lincoln Center so that couldn’t last forever.

So as these shows fade (some unfortunately) from our memory, we look ahead to the rest of the 2012-2013 Broadway season. Fingers crossed that it’s more eventful than the fall. 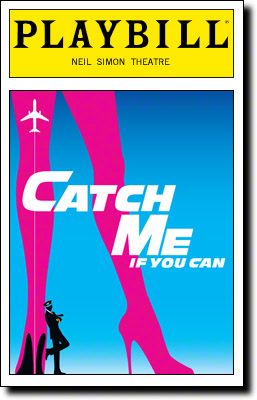 Every couple of years an extremely happy and upbeat musical dances it’s way onto Broadway.  Hairspray and Memphis come to mind most recently.  Catch Me If You Can is the most recent and has all the makings of Hairspray – literally, the same creative team is behind is and it is just as fun.  I was excited to catch one of the last previews (which was also a press performance so it was frozen) because it was a stronger guarantee that Aaron Tveit (as Frank Abignale) and Norbert Leo Butz (as Carl Hanratty) would be present.  I recently watched the movie of the same title and I loved the story but I’d heard mixed things about the musical so I went in nervously.

I hated the way the fourth way came crashing down the audiences head from the very beginning.  Tveit should have been “putting on a show” for Butz, not for the entire audience.  The orchestra is onstage the entire time and Tveit acknowledges them periodically and it was just cheesy.  There were so many references made to putting on a Broadway musical, and all I could think of was, “Yes, I know what I bought a ticket for this morning.  Stop telling me I’m at a show.”

Catch Me… is filled with flashy dance numbers and show stoppers, but the best show-stopper comes in the middle of Act 1 with the song “Don’t Break the Rules.”  Norbert Leo Butz dances in a way that I didn’t think he was capable of while being a vocally-flawless musical comedy genius.  There was at least a minute of applause after the number concluded and the audience was so enthused that I swore they were about to jump to their feet.  I couldn’t believe this was the same actor I had watched play the jaded “Roger” in Rent eleven years ago.

Kerry Butler performs the Eleven O’Clock number with “Fly, Fly Away” and although she sounds amazing, overall she is incredibly miscast was Frank’s love interest, Brenda.  Tom Wopat (Abignale Sr.) and Rachel de Benedet (Mrs. Abingnale) are both entertaining and endearing.  Aaron Tveit, as Abignale, is vocally impressive and almost has enough charisma to pull off the turn that DiCaprio took as Abignale years ago in the movie, but he’s just slightly off.  I enjoyed his performance, but certain moments weren’t one hundred percent believable.

Catch Me… is Hairspray with a better (true) story set to a different genre of music.  You’ll see the same brightly colored sets (David Rockwell), great choreography (Jerry Mitchell), aesthetically-pleasing lighting (Kenneth Posner), as well as an ensemble that is working their asses off.  You may have seen all the tricks that are turned in Catch Me.. before, but at least you won’t be bored while watching them again.