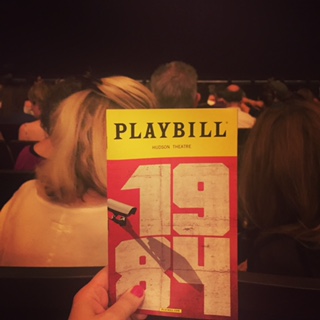 Last Thursday Kristen and I went to see the London-transfer of 1984. I’ve never read the book but I heard it was incredibly timely and she had heard it a great production, so off we went. We had great seats in the center orchestra and we eagerly waited for the lights to dim.

I will admit that I was a little bit lost for the first twenty or so minutes. I didn’t fully comprehend that most of the play was a flashback. But when we went back in time and this frightening world of Big Brother and constant surveillance was revealed, it was intense. It did get a bit graphic in the latter part of the single-act piece and it was a full- blown sensory overload; with incredibly bright flashing lights and defeating sound design.

The line that resonated with me the most was the line that went “they didn’t see it coming; they didn’t look up from their screens.” BOOM. Yup, that’s what’s happening now. (I say as I type this on my iPhone.)

Reed Birney was excellent (as always) as O’Brien. Olivia Wilde did a good job, but she was nothing extraordinary. The rest of the (I’ll call it an ensemble) cast did an exceptional job of bringing this unfathomably weird story to life onstage as well.

I hope they tighten it up a bit while it’s in previews. It’s listed as an hour-45 online but it was almost two hours in reality and it was a little slow at times, to be honest. But I think given the current state of our country, a refresher of 1984 is appropriate. So hopefully we WILL look up from our screens should we need to.

Oh, and props must be given where they are due. The social media team for 1984 is killing it. Both of our Instagram postings were found, scoured, and creepy stalker comments were left under our photos. Good job, kids.