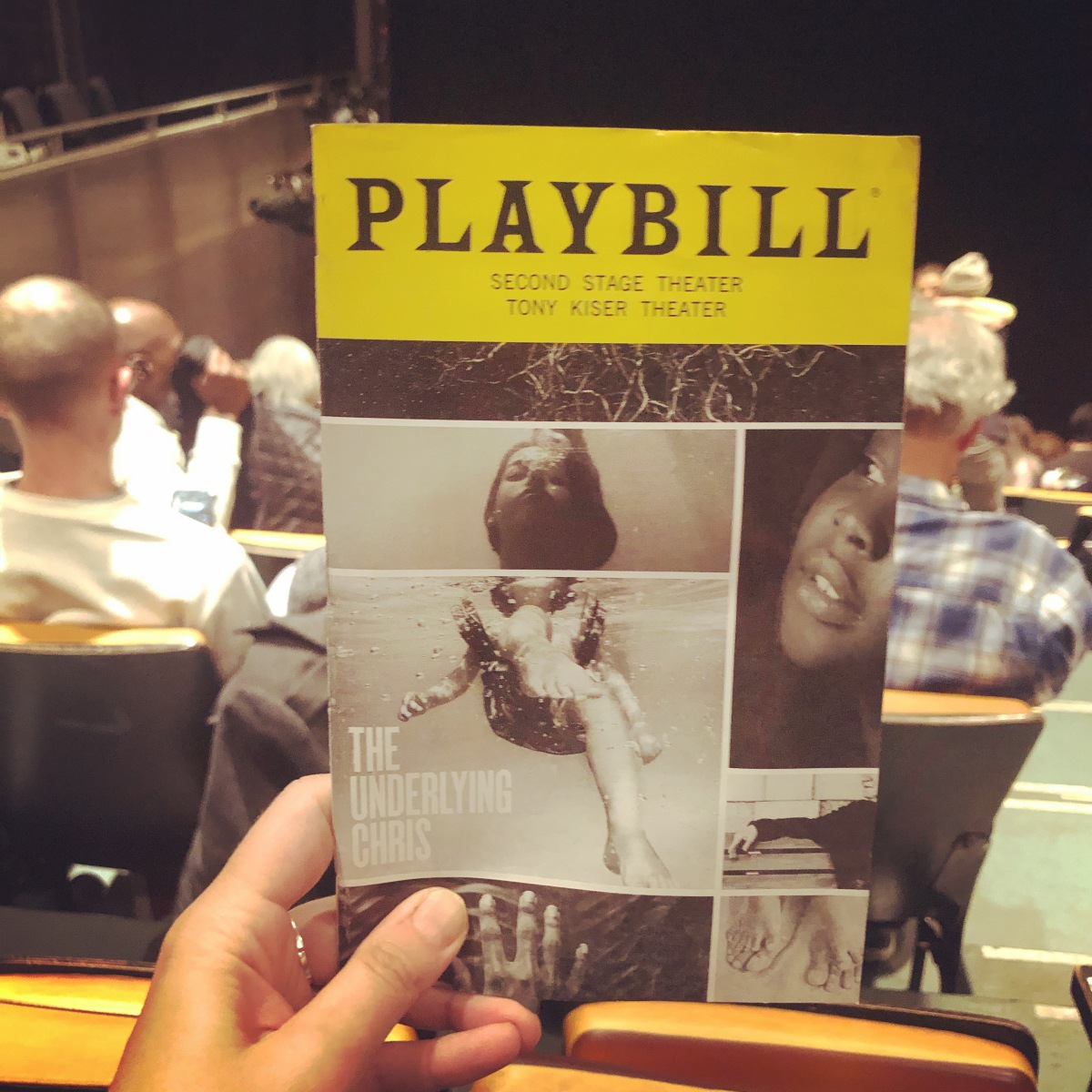 I guess last week was the week to see vague plays because last Sunday evening, I celebrated the 3-day weekend by seeing The Underlying Chris with my partner. Written by Will Eno, the Pulitzer-Prize nominated playwright who also wrote The Realistic Joneses, which was on Broadway back in 2014 (and that I sadly did not see). However, I have seen his play Thom Pain twice, in two different productions, so I sort of knew what I was getting into. (But not really.)

I read in reviews of The Realistic Joneses was a series of small scenes and I think that must be a theme in Eno’s work because that was also the structure of The Underlying Chris. On Second Stage’s website, it describes the playas “a life-affirming and high-spirited look at how a person comes into their identity, and how sometimes it’s life’s tiniest moments that most profoundly change our lives. In these divided times, The Underlying Chris serves as a celebration of our differences, our individuality, and the many mysterious, difficult, and beautiful things we share simply by being alive.”

I believe this may come across in the final scene, which is a funeral for someone named Chris, but a better description of this play would’ve been: “A play about many Chris’ in many different stages throughout one’s life and each scene is connected to the previous scene in a subtle or not-so-subtle way.”

An example of these unrelated scene connections is in the first scene, Chris is a newly born baby boy. The scene ends with his mother getting a call, but we never find out the nature of that call (though we do hear sirens so we’re led to believe that something’s happened). In the next scene, Chris is a young girl in a doctor’s office and she tells the doctor that her father died in a car accident when she was a baby.

I’m sure there was a big point somewhere that I completely missed but I completely didn’t see any celebrating of our diversity here.

I thought the best performances came from Howard Overshown and Isabella Russo, though the ensemble cast, each playing multiple roles, were equally strong.

It was an entertaining night, sure! But if you want something clear and focused with an easy to spot theme, this won’t be it. But I applaud Second Stage for giving space to a play like this.

Did you see it? What did you think?

If you want to find out more about The Underlying Chris, click here!

So, as you may or may not have read recently, the cast of The Realistic Joneses had their ’greet the press day’ last week. Starring Toni Collette, Michael C. Hall, Tracy Letts, and Marisa Tomei, previews will begin on March 13th. Did I mention its being directed by Sam Gold? Yeah, he’s kind of awesome. The show is “an outrageous, inside look at the people who live next door, the truths we think we know and the secrets we never imagined we all might share.”

I’ve teamed up with the fantastic folks at The Realistic Joneses to give you guys the opportunity to win two passes not to see a performance, but the final dress rehearsal. For those not in the industry, the final dress rehearsal is always the night before previews begin (usually) and is “invite only” for producers, writers, friends of the cast, etc.

Well, now one of you guys can go too! As you could probably guess, the invited dress is at the Lyceum Theatre on March 12th. So, if you’re around that night, you could be one of the lucky ones to go and check this show out before anyone else.

Winners will be chosen via a random name generator on March 8th. Good luck!