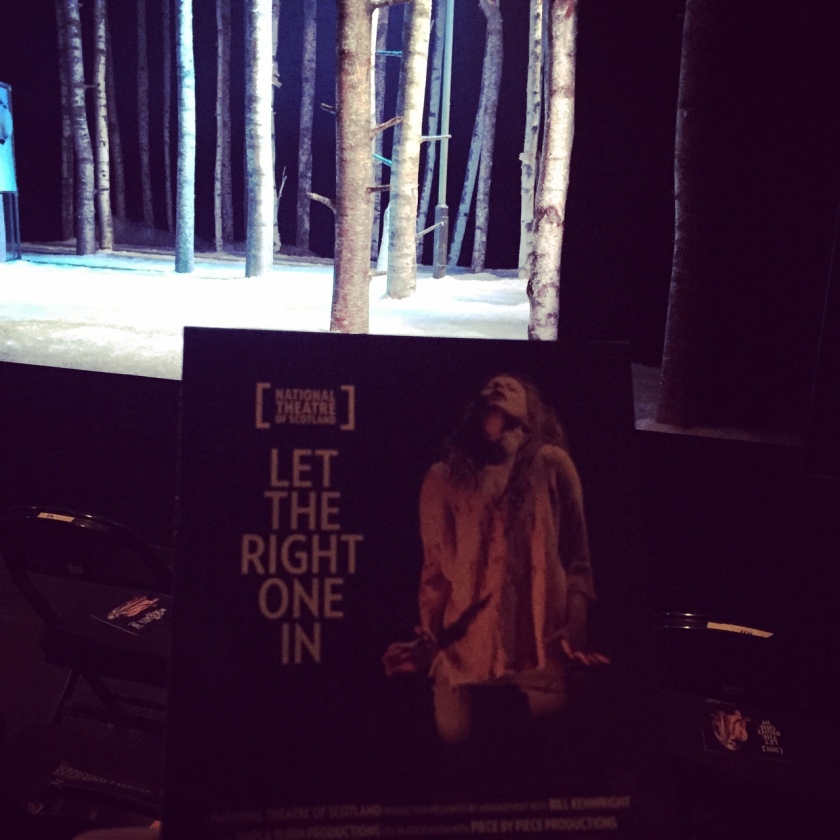 I’d heard mixed things about Let the Right One In at St. Ann’s Warehouse in Brooklyn. This was brought over from Scotland and I’m always intrigued to see a film-to-stage adaptation that’s based on a horror movie. I’d seen neither the original Swedish film or the recent remake, but I really wanted to see this. It was on my short list of “Things To See This Season,” so Kristen and I ventured to Dumbo, Brooklyn on Friday night to rush. Rush was easy to get and cheap ($20!). We got coffee from Brooklyn Roasting Company next door and drinks at 68 Jay Street after.

Let the Right One In was about a young boy who’s often bullied who’s life changes when he meets the new girl who moves in next door with, presumably, her father.

Spoiler alert: She’s a vampire. But they fall in love. Her father, who turns out to be a man who’s in love with her (because she is, obviously, much older than she looks) and when he starts acting out when he realizes he might lose her, he ends up dead.

The story is OK. It’s a very subtly frightening. it’s more eerie than anything else. There’s one cool special effect and one moment towards the end of the second act that made both Kristen and I jump out of our seats. It gets LOUD.

The real star of this show is the staging. The staging (along with the set by Christine Jones) is stunning. The trees onstage (pictured above) are real trees too! The lighting (by Chahine Yavroyan) was perfect and beautiful too. I’ve talked about how I love Steven Hoggett’s movement and it was mesmerizing in this production too.

Let the Right One In plays through March 8th. Check it out.