Film Review: The Book Next Door (or: Broadway Spotted: Kristen Chenoweth Shows Up in a Pixie Cut)

The weather has been kind of shit in New York this week – meaning my favorite kind of shit because aside from my laziness after work or yoga, it’s a lovely “excuse” to stay in and do nothing. And watch shitty movies on HBOGo! Last night’s shitty movie was The Boy Next Door, another infamously shitty JLo movie. (The most epically shitty and epically-amazing-because-of-how-shitty-it-is will always be Enough.)

The film was shit – totally flawed eye-rolling film filth. There’s no reason why anyone should ever watch this. Ever. (Promise me you won’t, okay?) It’s 90 minutes of cliche lines and an unbelievable bullshit plot that would probably never in a hundred years happen. #escapism

But who is JLo’s co-star? Kristin Chenoweth! I had absolutely no idea she was in this and I bet she wishes she hadn’t been (unless she just had to pay her mortgage, then whatever, I get it). She plays the principal of the school that JLo teachers literature and she also happens to be her bff. She also happens to have a horrendous pixie cut. Who put her in that awful wig? Spoiler alert: KChen dies and her dead body falls JLo when she arrives and starts looking for her bff.

Sidenote: Luckily though, her adorable cat, who is really in the movie for no reason at all other than to perpetuate the theme of Unmarried Cat Lady, goes unharmed. The cat is also in the room when KChen is tied up and screaming. Give me a break. That cat, any cat, would’ve been out of there so fucking fast. This is probably the most unbelievable part of the movie.

Conclusion: Unless you want to see Kristin Chenoweth say shitty lines in a pixie cut, never watch this movie. Ever. 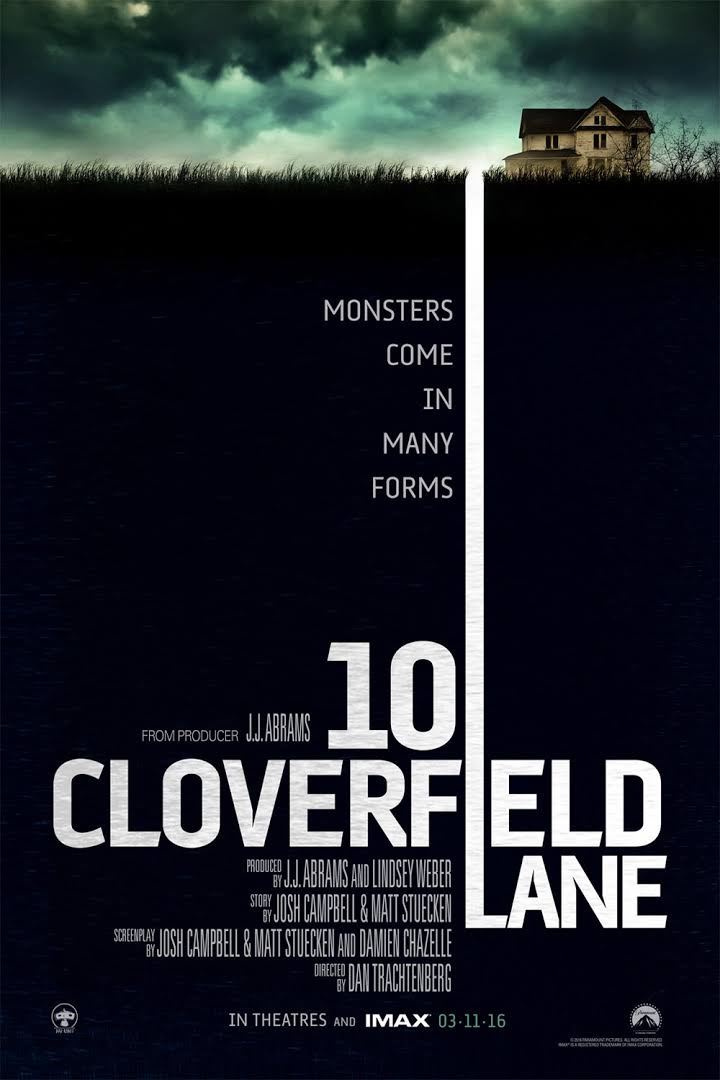 I missed this on opening weekend but got around to seeing it last Saturday. I went to the AMC on West 84th Street for the first time since they renovated a year or so ago and the seats are now all basically leather recliners. It’s a little nuts. I really love the original Cloverfield and although I suspected this one had very little, i.e. nothing, to do with the first one, I love John Goodman and John Gallagher Jr. so I was excited to see 10 Cloverfield Lane.

The movie opens up to the main character, Michelle (Mary Elizabeth Winstead), racing in her car down an empty road somewhere in the midwest probably while looking intermittently down at texts from her (now ex-)fiance asking her to please come back and not run away because she apparently always runs away when things get hard. When she turns on the radio, we hear about a massive blackout across much of the country (aliens?) and eventually she is driven off the road. When she wakes up, her leg is injured and she is chained to the wall of a steel vault with a mattress to sleep on.

John Goodman appears after she’s had a few minutes to freak out, bringing her food, telling her he saved her life, and the questions begin. John Gallagher Jr. is introduced shortly thereafter. Goodman also saved his life and he now sleeps on a cot behind some food racks. He needs a shave.

I walked out of the theatre a little perplexed. I wasn’t sure what to make of what I had just seen. Was John Goodman a good guy or a bad guy? There are probably 3 times that we’re lead to believe that he’s the good guy, with equally as many strikes against him where we’re left thinking he’s a total psychopath. Did he save them from something outside? Is the air really unbreatheable outside? Did he kill a girl? Why is he keeping them down there? I think he was probably really a psychopath but there obviously was something outside so was it just giving him a good excuse to abduct people? So many questions.

I need to read up on analyses written about 10 Cloverfield Lane, but I enjoyed it. There was lots of tension and suspense, and unlike Cloverfield, they actually didn’t show the monster until the very end.

So I skipped seeing Fifty Shades of Grey in theatres on opening weekend (I was congested) but I went to this morning (which, yes, I know, is kind of like drinking whiskey before, or so I’ve been told). Since it was before noon, it meant the ticket was half price and I was going to hop into a showing of Still Alice (so good, but depressing!) afterward so technically I was paying $4 to see the movie.

So, I hate to say it, I didn’t think it was possible, but the dialogue in the movie might be worse than the writing in the books. It was so cheesy. But unlike the two costars chemistry in various interviews and photoshoots, they do seem like they have chemistry in the movie. So, you know, that’s good. Possibly some spoiler alerts ahead….

The movie is pretty much the same as the book, but I feel like there was way less sex (they don’t, as I predicted, show the scene where he rips her tampon out because he has to have sex with her again at that very moment for the 1000th time). We never see Ana meet with Grey’s doctor and we never see Jose after the night that he sexually assaults Ana.

Is it a bad sign that I didn’t flinch at all when they first panned around Christian’s Red Room? There were some riding crops, some restraints, lots of floggers, a couch, and a bed. What’s the big deal? I didn’t see any knives around. (Let me know if I missed something though!)

There’s a meme going around on Facebook right now saying that Christian’s pursuits of Ana were only OK because he was a gorgeous billionaire and if he lived in a trailer, he would’ve ended up in jail. I agree. This is probably the case. However, a dude who lives in a trailer doesn’t have the means to fly someone in their personal helicopter to their penthouse or bestow upon them lavish gifts like first editions of books, Macbooks, or Audis. Christian tells Ana time and time again that she is free to leave whenever she wants to and his driver will take her home, etc. There are a few other things that I’d like to contest:

First: There was an article I read saying he plied her with alcohol, implying she was also drunk when she was talked into having sex with him. This is false, false, false. The night when she is fall down-blacked out drunk is the night that Christian saves her from being sexually assaulted by Jose after she graduates. Because she vomits all over herself and passes out, he takes her back to his hotel room, puts her in an oversized white t-shirt and lets her sleep. He gives her Advil and breakfast the next morning. Wow, what a manipulative asshole. Alcohol is in various scenes but it’s used as “stage” business. He takes out, glasses, pours the wine, they maybe take one sip, and then they put it down to go have sex somewhere. He is not using alcohol as a device to get her to do what he wants.

Next myth: she is being abused. She is so not. He keeps giving her multiple outs if she’s not comfortable or wants to leave. They have safe words. He checks with her that she knows what those safe words are (red and yellow) before anything happens. When she is restrained and getting flogged or whatnot, she is smiling and by all means looks 100% to be enjoying herself. Is this something she ever thought she’d be into? I’m guessing not. But like I said: she had ways to tell him to stop and he, I believe, would have. He was all about the trust (both in the books AND movie). If you’ve ever been flogged, you know it doesn’t really hurt (I’m sure, if done in a certain way, it CAN hurt but how he was using it, I’m quite sure that was not the intention).

The only time when he goes too far is when she asks, rather demands, to experience the “worst of it.” He hits her (on her ass) six times with a belt. This is too much for her and understandably so (it sounded like it hurt a lot). She is obviously not a painslut. As we’ll find out in the sequel (spoiler alert!), he’ll go to her and ask why she didn’t use the safe word like they’d agreed upon.

So, I’m going to go ahead and say that everything Ana did was her choice (and Dakota said in her interview with Glamour the same thing). She got pushed past her boundaries in the last scene because she allowed it.

But what’d you think of the movie? I’d love to hear.